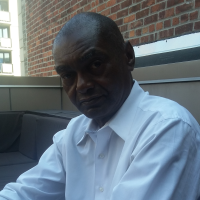 Award-winning photojournalist Ken Harris is professionally known as KENTHEPHOTOGRAPHER. He has covered many of the most significant events in the history of this country, including the historical Museum Million Man March as well as concerts, high profile dinners and movie and television sets. As a result, his work has appeared in such media outlets as CNN, Jet, The Amsterdam News, New York Trend, Right On! and Word Up! Magazines. His catalog includes images of former President Barack Obama, former First Lady Michelle Obama, former President Bill Clinton, Rev. Jesse Jackson, Rev. Al Sharpton, Beyoncé, Jay Z, Kanye West, Patti Labelle and many, many others. A native of Queens, NY, many of his images of the city and its residents are available for viewing through the Queens Library Memory Program. In addition, select celebrity photos are featured in the Photo Gallery section of rightondigital.com as he covers many of the events for the site. Twitter @kenharrispics
Articles Written
19
LATEST ARTICLES WRITTEN
Dec 5, 2019
CULTURE & EVENTS

Nas had a great time at an intimate dinner inspired by The Irishman, where key...

Astrologically speaking, those who are born under the sign of Libra are  social, diplomatic and cooperative, and they shy away...

Hip-hop’s favorite pup Trappy Goyard and his human 2 Chainz hosted a special screening of THE SECRET LIFE OF PETS...

Deloris Jordan is the mother of five children. Most know of her son Michael, six time NBA champion,...

Frank Robinson was born August 31st, 1935 in Beaumont, Texas. He was the youngest of 10 children born...

The 14th Annual Jazz in the Gardens has announced its star-studded lineup for the festival March 9 & 10,...

Widows, from Twentieth Century Fox, Regency Enterprises and See-Saw Films, is a feature-length adaptation of...

Creed 3 Has Premiere In Michael B. Jordan’s Hometown Of Newark, NJ

Over 700 guests were brought together for a special screening event hosted by Michael B. Jordan in celebration...

Bruno Mars ended his historic “24K Magic World Tour” in his hometown of Honolulu, HI and will...

Master P Ventures Into The World Of Comics

The Miller family reveals Vim Comics new superhero characters, comic books and movie Eyes of Esca, one of the...

Janet Jackson And Daddy Yankee Release “Made For Now!”

At the BMI Awards

https://youtu.be/4Kde4YRvXP0 Samad Savage is the artist who’s going to either change the world or change your world. At only 17...