Lit! 5 New Books To Check Out

An eclectic selection of books can be found in Right On! Digital’s latest roundup of reads.  Covering the gamut of poetry, fiction, children’s literature and thought-provoking  social justice topics, the top books who made our list are certainly worth checking out.

Author Keri D. Singleton, who doubles as the host/producer of the popular syndicated radio show, Keri’s Korner,  released “Journey: The Poems,” a compilation of thirty poems published by Entrigue Magazine that takes the reader on an unfiltered journey of the author’s life. Singleton’s follow up to his earlier novels promises to keep his fan base glued to the pages of this collection of words and photos.

“JOURNEY” is Singleton’s prose laced, autobiographical poem. From his native Boston to his dreams of becoming a writer in New York City, the title poem of the collection sets the tone for the rest of the book. There’s a unique audio version of the book, which can be found as well by visiting https://www.illadelstyles.net/kds.

If you love poetry, “JOURNEY: THE POEMS” book is an autobiographical literary work of art put to poems.

Timely and important, Redeeming Justice by Jarrett Adams is the unforgettable account of Adams’ harrowing journey through a legal system biased against him and the inspiring full-circle redemption he ultimately found for himself, and others wrongfully convicted.

He was seventeen when an all-white jury sentenced him to prison for a crime he did not commit. Now a pioneering lawyer, he recalls the journey that led to his exoneration—and inspired him to devote his life to fighting the many injustices in our legal system.

Barely out of high school and facing nearly thirty years behind bars, Jarrett Adams sought to figure out the why behind his fate. Sustained by his mother and aunts who brought him back from the edge of despair through letters of prayer and encouragement, Adams became obsessed with our legal system in all its damaged glory. After studying how his constitutional rights to effective counsel had been violated, he solicited the help of the Wisconsin Innocence Project, an organization that exonerates the wrongfully convicted, and won his release after nearly ten years in prison. For more information, visit https://www.penguinrandomhouse.com/books/624157/redeeming-justice-by-jarrett-adams/ 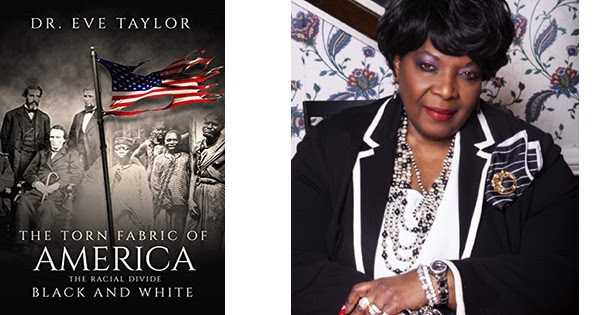 Since its humble beginnings, America has grappled with the complicated and sometimes troubling story of its origins, especially when it comes to race. Dr. Eve Taylor, an expert on race relations and a Civil Rights activist who worked with Rev. Dr. Martin Luther King, Jr. and Rep. John Lewis, has seen first-hand how racism has ripped at the fabric of the United States. Her experience coupled with the recent events of police brutality against African Americans spurred the author to pick up her pen once again and chronicle America’s racial past and present in her new book, The Torn Fabric of America: The Racial Divide, Black and White. The new book is currently available on Amazon.

Throughout the book’s 250+ pages, Dr. Taylor takes the reader from President Lincoln’s signing of the Emancipation Proclamation, the document that freed enslaved people to Juneteenth, the date in 1865 when the slaves were told of their freedom. She also recounts the Civil Rights Movement and the Bill of Rights and brings us into today as she speaks on the murder of George Floyd and the birth of the Black Lives Matter movement. Not only does Dr. Taylor share her personal perspective, but her book is chock full of historical references and documented facts. Not one to provide a problem without a solution, in her chapter, “The Mending of the Torn Fabric,” she shares what America must to do make the country truly the United States of America.

“Herbie Goes to School” follows an elementary-aged child as he emotionally navigates his own adjustments of moving to a new home, state and school. He’s afraid to make new friends and doesn’t want to go. He fears all the kids will laugh at him because he stutters. As Herbie endures challenges including social barriers, stuttering and bullying, he becomes a model of self-love and self-esteem for readers.