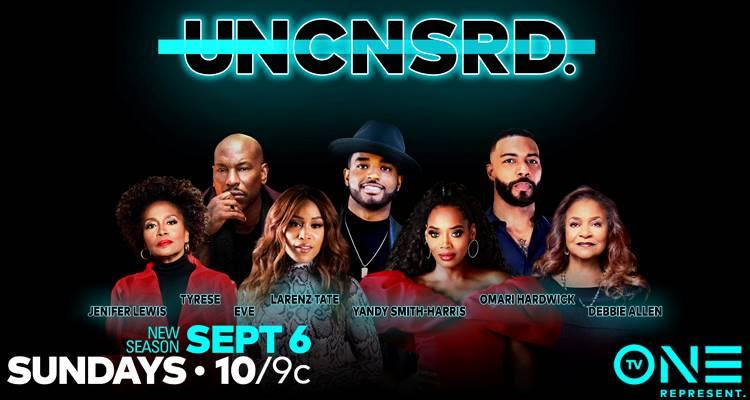 TV One’s original auto-biographical series UNCENSORED resumes for its third season with premiere episodes debuting on Sunday, September 6, 2020 at 10 P.M. ET/9C. The edgy docu-series explores the private lives of some of today’s most notable personalities including actor Larenz Tate, singer/actor Tyrese, rapper/TV personality Eve, producer/TV personality Yandy Smith-Harris, actor Omari Hardwick, actress/singer Jenifer Lewis and actress/choreographer/director Debbie Allen. This season also includes five bonus episodes including UNCENSORED: Black Girl Magic, UNCENSORED: Scandals, UNCENSORED: Hip-Hop, UNCENSORED: Black Hollywood and UNCENSORED: Big Break.
The autobiographical series delves into the lives of luminaries as they reveal secrets to their success, obstacles they faced and how they’ve navigated the perils of social media that helped and sometimes haunted their careers. Viewers will get a glimpse into the lives of high-profile celebrities as they reveal their stories, in their own words.
HERE’S THE LINE-UP:
LARENZ TATE
Airs: Sunday, September 6, 2020 at 10 PM/9C
Episode Description: Larenz Tate is probably best known for his role as the smooth talking, poet-reciting Darius Lovehall from the cult classic film, Love Jones but, Larenz rose to fame after playing the role of O-Dog in the 1993 teen drama film Menace II Society. He has gone on to star in both iconic television series and movies that continue to move the culture.
TYRESE
Airs: Sunday, September 13, 2020 at 10 PM/9C

Episode Description: Tyrese Gibson was born December 30, 1978 in Watts, Los Angeles, California, where he was raised. He is an R&B singer, songwriter, actor, author, television producer and model. He is well known for his actor role as Roman Pearce in the The Fast and Furious movie franchise. Other popular movies Tyrese has acted in are Death Race, Transformers, Baby Boy and Legion.

EVE
Airs: Sunday, September 20, 2020 at 10 PM/9C
Episode Description: Eve is a rapper and actress, best known for hits like ‘What Ya Want,’ and her Grammy-winning “Let Me Blow Ya Mind” collab with Gwen Stefani. She’s also starred in the Barbershop film franchise. A self-proclaimed “pitbull in a skirt” – an epithet better suited to her tomboyish early years than now – Eve was barely out of her teens when she had her first No. 1 album in 1999. By 2002, she had two more hit albums and won a Grammy – her sound and colorful personal style bridging the gap between the feminist Queen Latifah and the more overtly sexual Lil’ Kim. Since 2017, Eve has been one of the hosts of the CBS Daytime talk show, The Talk and in 2014 she married Maximillion Cooper, the British multimillionaire founder of the celebrity motor rally Gumball 3000, and now lives with him in London.
YANDY SMITH-HARRIS
Airs: Sunday, September 27, 2020 at 10 PM/9C
Episode Description: Yandy Smith is a Harlem born, entertainment manager and entrepreneur. In 2004, she graduated from Howard University and interned at Violator under the mentorship of Mona Scott-Young. In 2005, Yandy met Jim Jones on a private jet charted by Russell Simmons and left Violator to manage him full-time. In 2006, Yandy approached Mona to retool a TV pilot show and the concept was tweaked to include Jim’s girlfriend Chrissy and her circle of friends, becoming what would be later known as Love & Hip Hop. Through her time a cast member and manager, the hustle has always remained. She is now a wife to long time love Mendeecees Harris, mother and the longest running cast member on Love & Hip Hop.
JENIFER LEWIS
Airs: Sunday, October 4, 2020 at 10 PM/9C
Episode Description: Actress, singer, diva, activist, and the “Mother of Black Hollywood,” Jenifer Lewis is a force to be reckoned with. She began her career appearing in Broadway musicals and worked as a back-up singer for Bette Midler and has shown no signs of slowing down. Known as the Mother of Black Hollywood who has played everyone’s mom, from Tupac’s character in Poetic Justice, Whitney Houston’s mother in The Preacher’s Wife, Tina Turner’s mom, Zelma Bullock, in What’s Love Got to Do With It to Ruby on Black-ish.
DEBBIE ALLEN
Airs: Sunday, October 11, 2020 at 10 PM/9C
Episode Description: Debbie Allen is a multi-hyphenate- actress, dancer, choreographer, singer-songwriter, producer, and director. She has been nominated 20 times for Emmy awards; winning three, two Tony awards, a Golden Globe and ultimately receiving a star on the Hollywood Walk of Fame. Directing some of our favorite shows such as Everybody Hates Chris, Empire, Scandal, and How to Get Away With Murder, she is currently the Executive Producer of Grey’s Anatomy.
OMARI HARDWICK
Airs: Sunday, October 18 at 10 PM/9C
Episode Description: Omari Hardwick started his acting career living out of his car and went on to appear in a hit show that filmed on the streets where he once slept. He is an actor, writer, poet, and artist most known for his role as James “Ghost” St. Patrick on the Starz hit drama Power. And yet he’s nothing like any of the alter egos he plays on TV. Hardwick has slowly emerged as one of Hollywood’s hottest leading men due to his nuanced and strong performances.
BONUS EPISODE: BLACK GIRL MAGIC
Airs: Sunday, October 25, 2020 at 10 PM/9C
Episode Description: Black women face challenges daily and still manage to make things happen. Black Girl Magic celebrates the beauty, power, accomplishments, and strength of some of our favorite UNCENSORED women. If you’re a fan of the series or just tuning in for the first time, you’ll enjoy this retrospective around some of your favorites such as Tamar Braxton, LisaRaye McCoy, Nia Long, LaLa Anthony, Niecy Nash, Tisha Campbell, K. Michelle, and more.
BONUS EPISODE: SCANDALS
Airs: Sunday, November 1, 2020 at 10 PM/9C

Episode Description: When you’re dealing with over-the-top personalities, you’re bound to have some controversial moments. Find out the tea when we re-live some of the most scandalous moments ever confessed from NeNe Leaks, LisaRaye McCoy, Charlamagne The God, Le’Andria Johnson, Lamar Odom and more.

BONUS EPISODE: HIP HOP
Airs: Sunday, November 8, 2020 at 10 PM/9C
Episode Description: Hip Hop is a cultural movement that incorporates different elements of art and one of the most popular genres of music. Hip Hop’s influence has shaped styles, entertainment, and continues to be a global phenomenon impacting old and new generations. If you’re a fan of hip hop music, the series or just tuning in for the first time, you’ll enjoy this retrospective around some of your favorites such as Jermaine Dupri, Snoop Dogg, Rick Ross, and many more.
BONUS EPISODE: BLACK HOLLYWOOD
Airs: Sunday, November 15, 2020 at 10 PM/9C
Episode Description: If you don’t have a seat at the table, sometimes you have to create your own. Black Hollywood has been making major contributions to TV and film for decades, whether recognized or not, and it’s not stopping any time soon. Take a look back with some of your favorite entertainers such as Nia Long, Tisha Campbell, Tichina Arnold, and more while they reminisce on their time in Black Hollywood.
BONUS EPISODE: BIG BREAK
Airs: Sunday, November 22, 2020 at 10 PM/9C
Episode Description: Going zero to 100 doesn’t always happen very quick. Success can be a long journey and according to most people, it’s worth the trouble. Take a look back at some of your favorite celebs like Tasha Smith, Kirk Franklin, Nick Cannon, and more as they describe their rags-to-riches story.